South Adelaide Basketball Club (SABC) encourages players of all ages and abilities to aspire to play at the highest possible level, and our programs provide players with the fundamentals to do so. SABC provides guidance, training and support throughout all levels, from juniors to seniors. We focus on the development and growth of players, supporting them in reaching their full potential, and promoting opportunities for state representation and beyond. 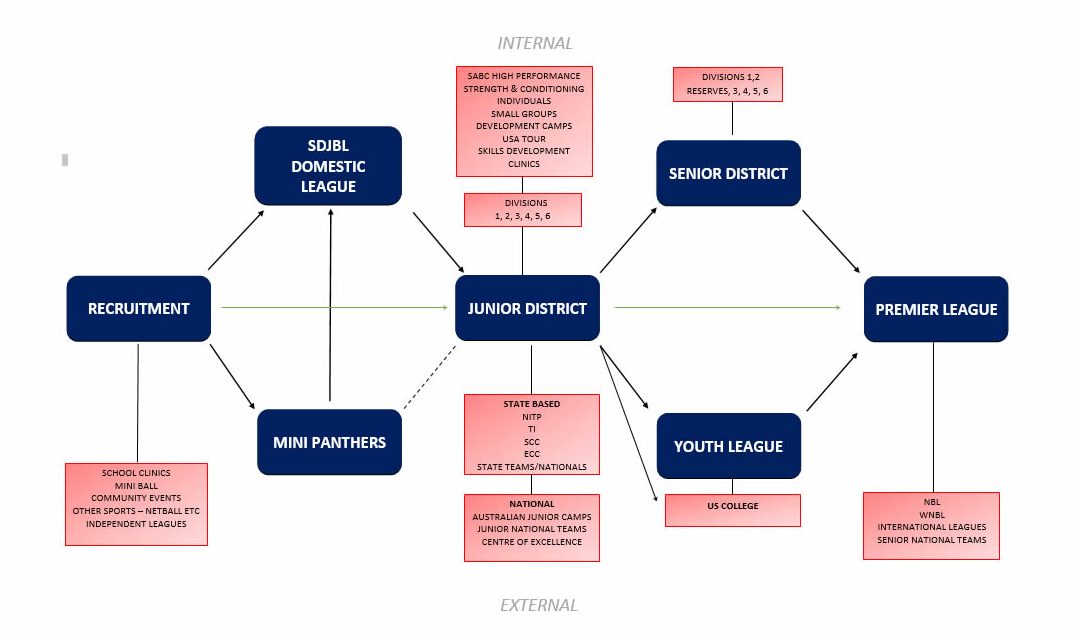 What programs does SABC offer?

SABCs Mini Panther Program is a skills-based program providing young children with a fun introduction to basketball whilst developing the core skills to allow players to transition as a confident player into our junior club programs. It runs during each school term on a Saturday or Sunday, 45 minute sessions once a week for 6 weeks. Cost is $70 which includes a ball.

The Southern Districts Junior Basketball League (SDJBL) is a local competition for junior players in the southern suburbs and country areas south of Adelaide. The purpose is to provide a competition that is accessible without overburdening families with the time and financial commitments of the District basketball system. The Domestic competition is a great way for junior players (U8s through to U18s) of all abilities to train once a week as well as play “proper” games in a competitive but friendly environment.

Junior District competition is Basketball SAs elite representative basketball competition. SABC fields teams from Under 10s to Under 18s and focuses on skill development and providing pathways for all players to achieve the highest level of success possible. There is an expectation that players will have a high level of commitment to the sport, the Club and their own development. Games are played right across metropolitan Adelaide and players are expected to participate in carnivals and tournaments held locally as well as country and interstate.
Entry into the Junior District competition is through trials which are carried out in August each year. New and Domestic players are encouraged to attend. District squad placements are both limited and highly sort after. Those who do not fill positions in the squads are urged to continue to play in the SDJBL Domestic Competition.

Our senior program fields teams in the U23s (Youth League) and open age (Seniors) competitions ranging from Division 1 (those who wish to play competitive basketball) through to Division 5 (which is semi-social).

SABC enters our most elite men and women players into Basketball SA’s Premier League. Many players have come up through SABCs junior pathway and are joined by our hand-selected players sourced locally and from around the world.
The Premier League competition runs from April through to August with games played on Saturday nights. We encourage all of our members to show their support for our top athletes by attending games and cheering from the sidelines.

What are the seasons?

What is my age group?

To be eligible to play in an age group, players must be under the relevant age on December 31 in the year in which the season ends. For example, to play Under 10 in 2018/19 seasons, players must not turn 10 until after 31 December 2019.

What size basketball do I need?

How much are the fees each Season?

The membership fee schedule for 2018/19 Seasons are detailed as follows:

Where can I get more information?